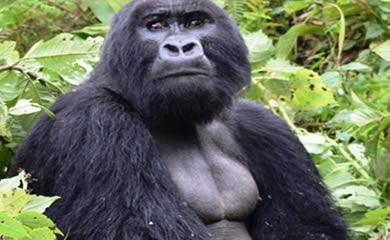 Kahuzi Biega national Park is located in the eastern part of democratic republic of congo , with Bukavu as the capital of South Kivu. From Bukavu you can film lowland gorillas in Kahuzi Biega National park, Idjwi Island on Lake Kivu, and Minova village.

Goma is the capital of North Kivu. From Goma you can film Virunga National Park mountain gorillas, elephants, lions, hippos and buffaloes. Volcano in the Virunga Mountains include Mount Sabyinyo, Mount Mikeno, and Nyamuragira. Mount Nyiragongo is home to the world’s largest lava lake.

Kahuzi Biéga National Park is home to one of the last troops of eastern lowland gorillas, a subspecies indigenous to the country and the second destination where Eastern Lowland gorilla can be spotted is the maiko national park, located  near benni in democratic republic of congo.

Given that  national parks are located in the eastern part of Congo, from a logistics point of view, filming safaris visiting productions are better off accessing them through Uganda, Rwanda, and Burundi.

The Travelers coming to Kahuzi Biega National Park for gorilla filming adventure, you wont require to secure the Photo permit as the case for Journalist that will require to have accreditation Permit serves as a film permit to shoot in public locations across the country.

Please Note the following while on a Congo Filming  Safari

The DR Congo has no specific permitting system in place so location permits are negotiated on a case by case basis. Unauthorized filming of government buildings, military installations, and along border areas is illegal and may result in arrest and confiscation of film equipment.  Additional permission is also required for shoots that require exclusive use of public space, traffic control, filming in markets, national parks and drone filming.

Are you planning to Film Eastern Lowland Gorilla in Kahuzi Biega?

Trip for gorilla trekkers can easily record gorilla videos while on 2 Days Uganda Gorilla Safaris using their camera its accepted by Uganda wildlife authority and the same works in Kahuzi Biega National Park for memories but making an extra effort to Undertake filming Gorilla Safari to watch the Eastern Lowland Gorillas in Kahuzi Biega or the mountain gorillas in Virunga Mountains  &  Bwindi,take a video shooting in Africa while on Self drive Safari to Africa.

When To Shoot the Eastern Lowland gorillas ?

We have been selling primate experiences – whether gorilla trekking,chimpanzee tracking or orangutan tours – for over 20 years and such is our knowledge, that over this time we have arranged tours for ITV and BBC film crews, shown CNN journalists.

We recommended Reliable Safari companies that are based in Eastern Congo to help you plan a Gorilla Filming Safari adventure to Kahuzi Biega & Virunga National Park in North Kivu.

Most passport holders require a visa to enter the DRC. Apply for a regular tourist visa at your closest DRC consulate or embassy. As well as all of the usual documents applicants must also include an invitation from our local DRC fixer, as well as proof of vaccination against yellow fever. For film crew travelling on US passports see here for more information. Once you arrive in the DRC, our DRC fixer makes an application with the Ministry of Communication and Media for a Journalist Accreditation Permit for each crew member. This permit allows crews to film at public locations across the country.

Car Rental For Self Drive in Tanzania?

Golden Monkey Trekking
Top Destinations for Gorilla Trekking in Africa
What to look for while booking car Hire services
What to Pack for Your Kahuzi Biega Gorilla Vacation
Africa’s oldest national park faces closure.
How to Find For Hiring a Self Drive Car in Uganda
Tshiabati Waterfalls Trail in Kahuzi Biega National Park

Cost of Gorilla Permit in Africa

Gorilla Habituation Safaris as an Activity by Potential Visitors