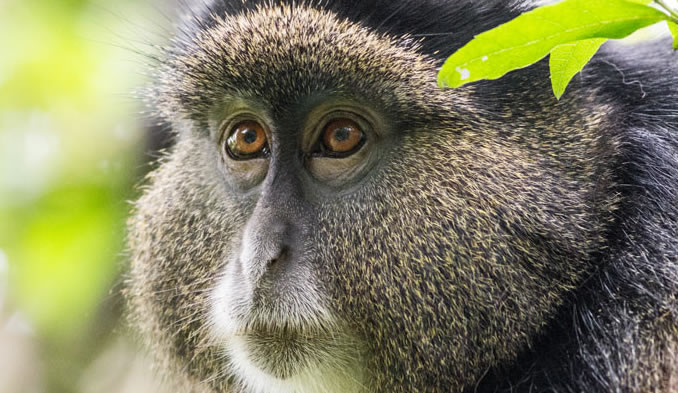 Among the top Safari Activities and primates to be visited & trekked in Kahuzi biega is the Golden monkey which have been spotted in the great Kahuzi biega .

Democratic republic of congo  is primate country has its well known to be the home for the rare Eastern Lowland gorillas which are only found in Kahuzi biega & Maiko National Park and gorilla trekking is the top safari activity .

Primates in Congo include : Eastern Lowland Gorillas, Mountain Gorillas,  chimpanzees,Golden monkeys, but one primate species that stands out in Kahuzi Biega National Park & Virunga National Park that is add on Safari activity recommended to travelers is the golden monkey Tracking. Very rare and elusive, tracking the golden monkey in Congo while on a gorilla safari can call for an extra day on the congo Safari trip which is quite interesting and adventurous.

In Kahuzi Biega  national park, golden monkey trekking will be starts at 8.00am. There is brief orientation on what to expect and what to do or not to do while in the forest. You are then separated into groups with guides and off you go tracking monkeys in the bamboo forest.

You can pair golden monkey tracking with another activity or activities like chimpanzee Tracking , Water falls and Nature walks . If you want o go golden monkey tracking in Congo, you can always add gorilla trekking, or mountain climbing ( Kahuzi , Biega)  or bird watching, cave exploration and so much more to your itinerary. That way you will have activities throughout your safari and you will not get bored , Select the 7 days Congo Gorilla safaris.

Golden monkeys are one more animal you need to see on your Congo Safari adventure. While there are so many other exciting activities such as gorilla trekking, white water rafting, and mountain climbing and so much more, golden monkey tracking is exciting and interesting all on its own.

Car Rental For Self Drive in Tanzania?

Golden Monkey Trekking
Top Destinations for Gorilla Trekking in Africa
What to look for while booking car Hire services
What to Pack for Your Kahuzi Biega Gorilla Vacation
Africa’s oldest national park faces closure.
How to Find For Hiring a Self Drive Car in Uganda
Tshiabati Waterfalls Trail in Kahuzi Biega National Park

Cost of Gorilla Permit in Africa

Gorilla Habituation Safaris as an Activity by Potential Visitors